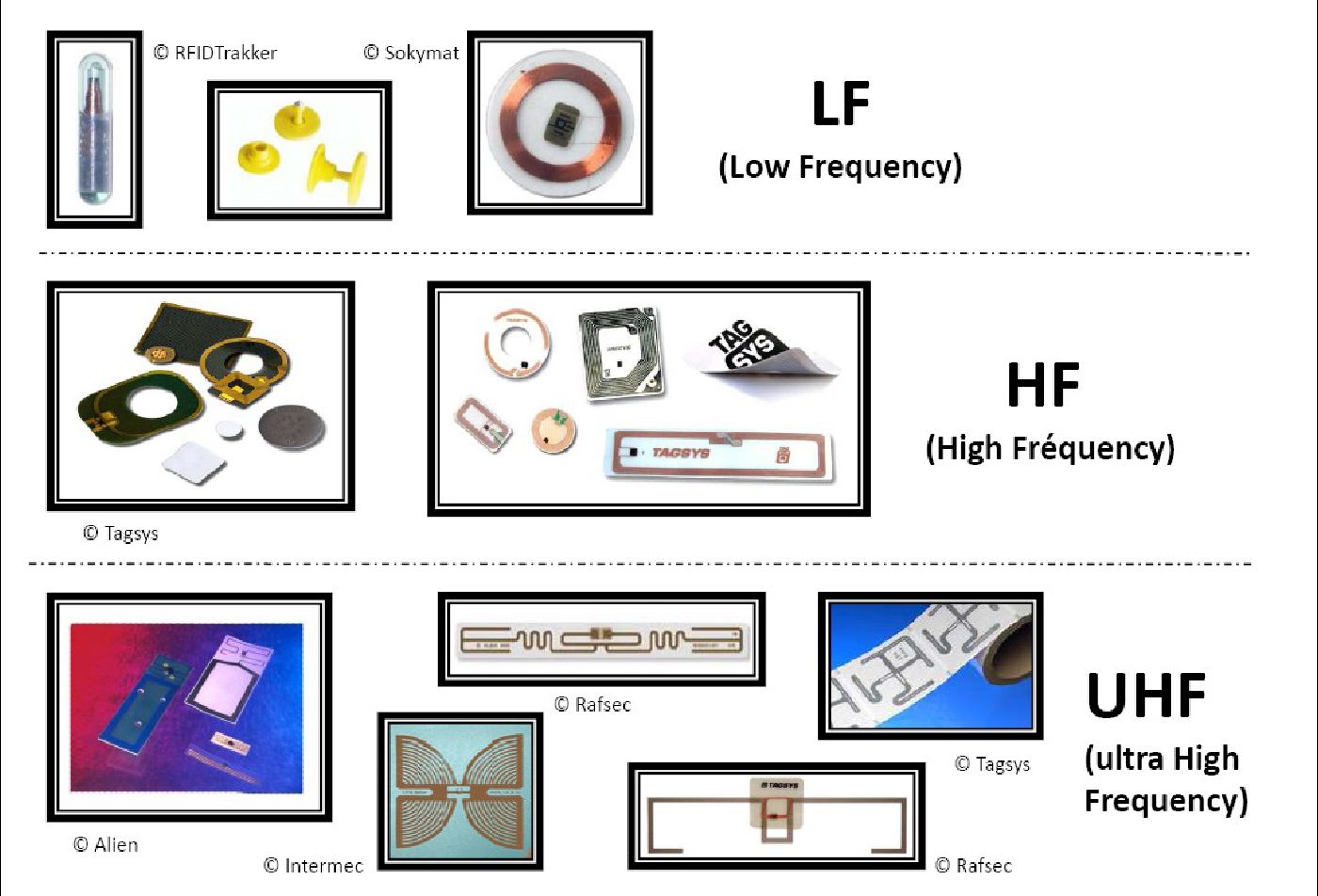 UHF Gen2 is the fastest growing segment of the RFID market

The LF band covers frequencies from 30 KHz to 300 KHz. Typically LF RFID systems operate at 125 KHz, although there are some that operate at 134 KHz. This frequency band provides a short read range of 10 cm, and has slower read speed than the higher frequencies, but is not very sensitive to radio wave interference.

Standards for LF animal-tracking systems are defined in ISO 14223, and ISO/IEC 18000-2. The LF spectrum is not considered a truly global application because of slight differences in frequency and power levels throughout the world.

The HF band ranges from 3 to 30 MHz. Most HF RFID systems operate at 13.56 MHz with read ranges between 10 cm and 1 m. HF systems experience moderate sensitivity to interference.

There are several HF RFID standards in place, such as the ISO 15693 standard for tracking items, and the ECMA-340 and ISO/IEC 18092 standards for Near Field Communication (NFC), a shortrange technology that is commonly used for data exchange between devices. Other HF standards include the ISO/IEC 14443 A and ISO/IEC 14443 standards for MIFARE technology, which used in smart cards and proximity cards, and the JIS X 6319-4 for FeliCa, which is a smart card system commonly used in electronic money cards.

The UHF frequency band covers the range from 300 MHz to 3 GHz. Systems complying with the UHF Gen2 standard for RFID use the 860 to 960 MHz band. While there is some variance in frequency from region to region, UHF Gen2 RFID systems in most countries operate between 900 and 915 MHz.

The read range of passive UHF systems can be as long as 12 m, and UHF RFID has a faster data transfer rate than LF or HF. UHF RFID is the most sensitive to interference, but many UHF product manufacturers have found ways of designing tags, antennas, and readers to keep performance high even in difficult environments. Passive UHF tags are easier and cheaper to manufacture than LF and HF tags.

UHF RFID is used in a wide variety of applications, ranging from retail inventory management, to pharmaceutical anti-counterfeiting, to wireless device configuration. The bulk of new RFID projects are using UHF opposed to LF or HF, making UHF the fastest growing segment of the RFID market.

20x the range and speed of HF

The technology for item tagging

In active RFID systems, tags have their own transmitter and power source. Usually, the power source is a battery. Active tags broadcast their own signal to transmit the information stored on their microchips.

Active RFID systems typically operate in the ultra-high frequency (UHF) band and offer a range of up to 100 m. In general, active tags are used on large objects, such as rail cars, big reusable containers, and other assets that need to be tracked over long distances.

There are two main types of active tags: transponders and beacons. Transponders are “woken up” when they receive a radio signal from a reader, and then power on and respond by transmitting a signal back. Because transponders do not actively radiate radio waves until they receive a reader signal, they conserve battery life.

Beacons are used in most real-time locating systems (RTLS), in order to track the precise location of an asset continuously. Unlike transponders, beacons are not powered on by the reader’s signal. Instead, they emit signals at pre-set intervals. Depending on the level of locating accuracy required, beacons can be set to emit signals every few seconds, or once a day. Each beacon’s signal is received by reader antennas that are positioned around the perimeter of the area being monitored, and communicates the tag’s ID information and position.

In passive RFID systems, the reader and reader antenna send a radio signal to the tag. The RFID tag then uses the transmitted signal to power on, and reflect energy back to the reader.

Passive RFID systems can operate in the low frequency (LF), high frequency (HF) or ultra-high frequency (UHF) radio bands. As passive system ranges are limited by the power of the tag’s backscatter (the radio signal reflected from the tag back to the reader), they are typically less than 10 m. Because passive tags do not require a power source or transmitter, and only require a tag chip and antenna, they are cheaper, smaller, and easier to manufacture than active tags.

Passive tags can be packaged in many different ways, depending on the specific RFID application requirements. For instance, they may be mounted on a substrate, or sandwiched between an adhesive layer and a paper label to create smart RFID labels. Passive tags may also be embedded in a variety of devices or packages to make the tag resistant to extreme temperatures or harsh chemicals.

Passive RFID solutions are useful for many applications, and are commonly deployed to track goods in the supply chain, to inventory assets in the retail industry, to authenticate products such as pharmaceuticals, and to embed RFID capability in a variety of devices. Passive RFID can even be used in warehouses and distribution centers, in spite of its shorter range, by setting up readers at choke points to monitor asset movement.

A Battery-Assisted Passive RFID tag is a type of passive tag which incorporates a crucial active tag feature. While most passive RFID tags use the energy from the RFID reader’s signal to power on the tag’s chip and backscatter to the reader, BAP tags use an integrated power source (usually a battery) to power on the chip, so all of the captured energy from the reader can be used for backscatter. Unlike transponders, BAP tags do not have their own transmitters.

We want to hear from you!
Please submit any questions, suggestions, or general feedback through available email address or fill the form to the right.

Thanks for filling out form!